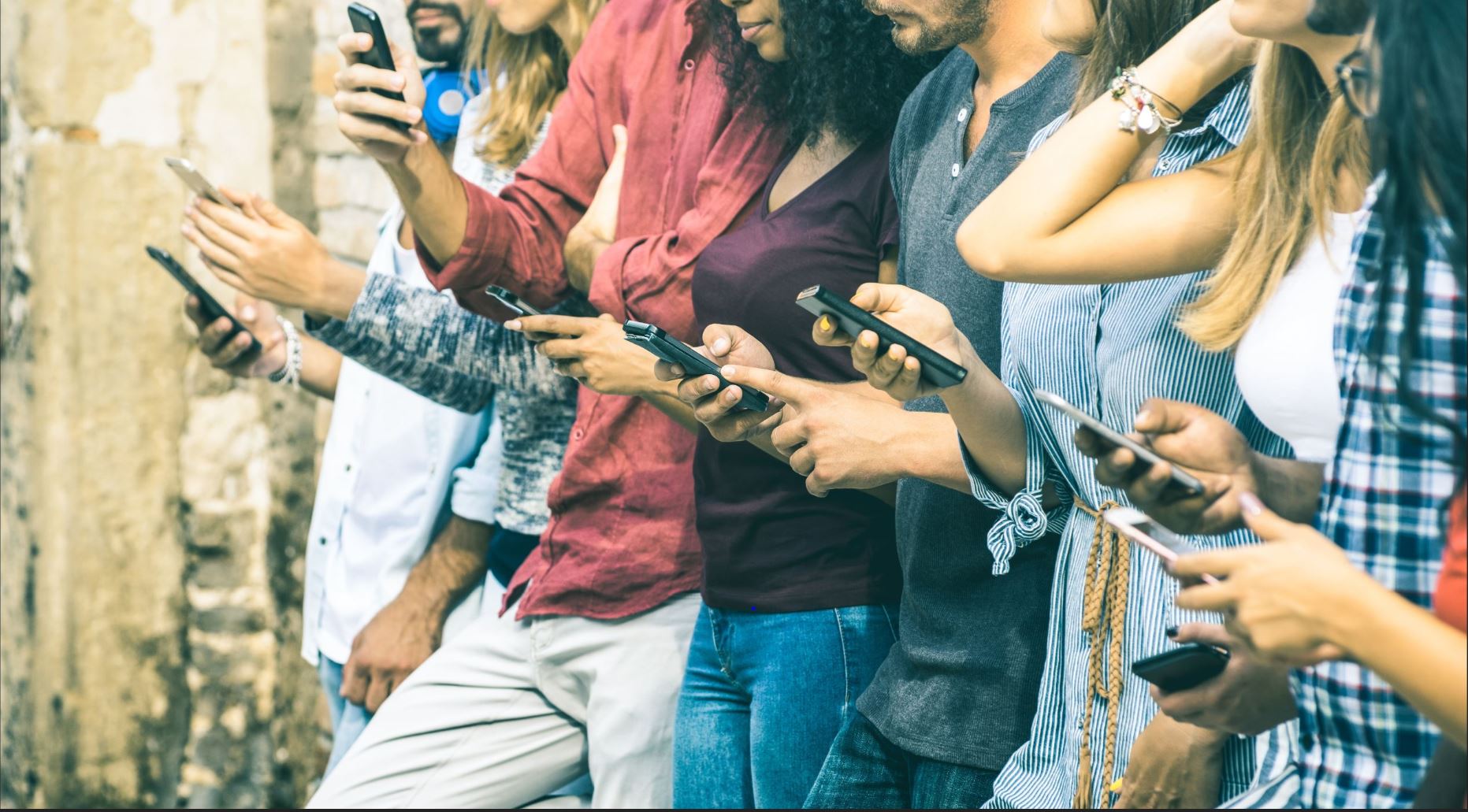 Addiction is defined as “compulsive behavior that leads to undesired and negative consequences.” While there are plenty of compulsive behaviors that do not lead to negative consequences, I focus on compulsive Social Media use and the problems that arise from it. We have all seen people in a group setting that could be observing and listening to the life around them, but instead they are looking into their phone, the ‘Black Mirror.’ Netflix has, as mentioned, an entire series based on technology taking over our minds and personal interests; looking into the depths of that in which we are tuning sadly and unrelenting to, leaving life situations that we characterize as ‘mundane’ behind. There is a true epidemic of ‘Social Media Stature’, where ‘my life is better than yours’, ‘Likes’ take over, and always being happy is seemingly the norm. A growing body of research indicates that social media use may not only be harmful, but it is also common that people underestimate their own usage.[1] We each forget that it is perfectly acceptable to feel terrible once in a while! The feelings of anger, despair, and resentment are reptilian cues for each for us to push and challenge ourselves, working harder for a better tomorrow – not creating angst and helplessness. Life is supposed to suck sometimes, and it seems that Social Media is creating an environment of envy, jealousy, and loathing of the ‘better’ life that someone else supposedly has.[2]

One reason for explaining the massive success of social media is that this technology is extremely effective at stimulating our fundamental neurological processes. Engaging with social media can produce a dopamine response, which is part of the pleasure-seeking behavior involved online.[3] These small dopamine boosts create a pleasure-seeking loop, similar to the way humans continually pursue drugs, food, and sex. These dopamine hits train individuals to crave interaction with a screen, rather than people; even at the potential risk of losing productivity, time, and relationships. While we experience this loss, the act of receiving ‘likes’ and ‘comments’ on Facebook posts, activates the pleasure center of the brain and creates users to comeback for more.[4] From recording a concert you will never watch back again to taking pictures that we will never look at, everyone feels the need to record life around us and we do not know why. We have all seen people record life changing moments around us but there has been very little time spent on researching how digitizing these moments, keeping them forever in your digital memory while missing the moment in real life, will impact us in the future. This system of stimulation is, unsurprisingly, purposefully designed. Psychologist Larry Rosen shows the machine code that ‘Snapchat, in all of its little content, knows exactly what you’re looking at and exactly how many seconds you looked, when you clicked away, and they’re meticulously recording every behavior you’re performing.’[5] This information is then aggregated to show users the information that will be most appealing to them, thus optimizing the small dopamine boosts for a pleasure-seeking loop. The algorithms used for placing content in front of the user have been programmed with Pavlovian cues and seeming unpredictability, two factors which support the development of addictive behaviors.[6] These dopamine increases train individuals to create social interaction with a screen, rather than real people, creating a loss of productivity, time, and relationships.[7] Even while we experience this loss, the act of receiving ‘likes’ and ‘comments’ on Facebook posts activates the pleasure center of the brain and creates users to come back for more. A very simple yet very effective system to create the stimulation that we crave.

While there are many Cons of Social Media, clearly there are a lot of positive aspects as well. One of the biggest Pros of social media is the ability to keep in contact with a wide network of individuals much more easily than ever before.[8] Research shows that people can get support from peers more easily, 24/7 potential availability of your friends, no geographical limitations (except for China & North Korea), and social media boosts real-time news outreach.[9] The good of social media is undeniable and used by people every day. Social Media is also responsible for worldwide change because sites like Facebook and Twitter have been the catalyst for people to congregate and make socially different political decisions, effecting Nations on a World level.[10] Regimes have been toppled and new leaders have risen, all of which would not have been possible without the creation of Social Media on the other side of the planet. Many individuals in popular culture and mass media effectively articulate the freedoms that we have as Americans, and how a simple gathering of people with similar ideas is not allowed in many countries around the world. Balancing these positive ideas with the negative is crucial to maintaining a positive online presence; thus, creating helpful interactions online rather than detrimental conversations with online Trolls.

Growing research describes both the extent of social media use, as well as the particular harms that come with it. In a recent study conducted on millennials by UC Berkley, social media interaction was the number one activity that young teens are engaging in each day.[11] Millennials report checking social media more than an average of ten times per day, and mistakenly believing that if something goes wrong in their own life, they will get help from their online community, even if that community consists of relative strangers.[12] In another recent study conducted by Facebook themselves, the increased amount of time spent each day on social media was correlated with an increase of perceived social isolation.[13] Disturbingly this is paradoxical because we go online to be a part of other people’s networks, while it creates deeper isolation. Other studies at UC Berkley shows a correlation of jealousy and social media use.[14] By creating a vicious circle that Facebook analysts admit to, users end up in an endless cycle of trying to one-up each other.[15]

Recent research by UC San Diego’s Professors Holly Shakya and Nicholas Christakis, indicates that the more time people spend using Facebook or other forms of Social Media, increases susceptibility of diminished well-being, such as reduced physical or mental health and life satisfaction.[16] As suggested in this research, this presumption makes logical sense because more time spent on social media takes time away from interactions in real life. ‘Dunbar’s number’ is 150 – this is the theoretical maximum number of people that someone can remember in one person’s life or ‘tribe’.

So how can each of us possibly have that many friends on Facebook?

Can we even remember all of their names? While there were limitations of the study, just as there are in any Social Media response studies, the fact that individuals responded negatively in the same manner suggests the impact is significant.[17] Individuals’ self-perceptions and feelings were significantly impacted in a negative manner affecting their diet, mood, sleep schedule, class, and friendships. It is also believed that ‘the associations between Facebook use and compromised well-being may stem from the simple fact that those with compromised well-being may be more likely to seek solace or attempt to alleviate loneliness by excessively using Facebook in the first place.’[18] Additionally, ‘prior research has concluded that social media may detract the amount of face-to-face relationships, decrease the amount of time individuals choose to take part in meaningful activities, lead to internet addiction and a diminished self-esteem by comparing one’s own life to others on social media.’[19]

Why do we allow Social Media to affect us in this manner? UC San Diego’s research suggests that people believe they are getting more positive benefits from social media than they are in actuality, based off of the small Pavlovian cues that our brains receive from cell phones. Therefore, it becomes obvious why each of us spends more time on Social Media than we want to; billion-dollar companies have begun creating apps that hijack our auditory and visual response systems creating an endless feedback loop of looking for new posts, comments, or ‘likes’ – for that one more shot of dopamine received.

Additional UCSD research conducted at the Rady School of Management by Ayelet Gneezy and Kristen Duke was published by the University of Chicago Press[20] and summarized by the Harvard Business Review[21] explains the Public’s addiction to smartphones. While the use of social media was not specifically quantified, a significant portion of the screen time was related to the connection of ‘Family & Co-Workers’ inferring the overuse of social media. The conclusions of Gneezy’s and Duke’s research is that in order to maximize productivity in cognitively demanding situations, we might need to ‘Turn Off’ and put these devices away.

In Winter Quarter of 2017 during Finals Week, I conducted a sample research survey at UC San Diego on the undergraduate population in front of Geisel Library. Students were asked to document how many hours per day they used Social Media for a monetary incentive, and all participants asked willing included themselves in my data. The Simple Random Sample revealed that 22% of college students logged onto their social media account more than 10 times per day for a total of more than 1.5 hours; while the entire sample was using Social Media more than double the amount than originally thought; from a ‘Believed’ average of 20 minutes, to an ‘Actual’ average of 41 minutes.[22]

Because of the virtual zero ability for self-regulation and susceptibility to peer pressure from friends, all of us are at an increased risk of cyber bullying, privacy issues, sexting, jealousy, rage, and depression.[23] Much of this digital technology is too difficult for adolescent brains to comprehend as privacy becomes a relic that was given away, whether it was the Patriot Act after 9/11 or Amazon Alexa tracking you inside your home incentivizing ‘Free 2 Day Shipping’. As responsible civilians, parents, and citizens of the World, we owe it to ourselves and our children to understand the susceptibility of social media to take over our emotions and begin to train ourselves to be more focused on life, love, family, happiness, health, and hobbies – the things that truly matter in Life. Data from the website www.99DaysofFreedom.com, which encourages people to stop using Facebook for 99 days, revealed the difficulty people have with getting rid of social media, with under 20% of people who signed up being able to complete the challenge.[24] Sean Parker, early Facebook investor and billionaire, said that Facebook was designed early on to ‘consume as much time and consciousness as possible.’[25] Personal education to ourselves about the power of these devices in our lives and having the dedicated desire for betterment will prevent social media from controlling our minds. Despite this all, we must as a society learn how to use this new technology in a positive, self-benefitting manner rather than having overuse lead to envy, anger, and jealousy. The choice is ours.

Brett Blazys is the founder, motivator, and visionary behind Econ Evidence. He started his consulting career as a peer-to-peer consultant and his outstanding, global success within the biotech area launched him into corporate consulting. Prior to starting Econ Evidence, Brett was a Senior Portfolio Analyst & Operations Consultant for a Fortune 500 Clinical Research Organization and later received his MBA from the Rady School of Management. With years of international clinical consulting experience, in various countries across Europe and Asia, performing complex financial planning and optimization, he is the ideal leader for Econ Evidence. Contact Us today for Brett Blazys’ CV.